Once a significant cause of perinatal loss, alloimmunization to red cell antigens is infrequently encountered in obstetrical practice today. Although maternal alloimmunization to the rhesus blood group D (RhD) antigen remains the leading cause of fetal anemia, over 50 different red cell antigens have been associated with hemolytic disease of the fetus and newborn (HDFN). Sensitization to any one of these antigens occurs in approximately 1% of pregnancies.1 Most of these anti-red cell antibodies result in the need for only phototherapy or simple transfusions after birth. However, after anti-RhD, only a few red cell antibodies are associated with profound HDFN necessitating fetal therapy. A review of one large series of intrauterine transfusions (IUTs) from a national referral center indicated that 10% of IUTs were secondary to Kell disease, and 3.5% of IUTs were secondary to anti-c alloimmunization.2 In another large series of IUTs, anti-E, anti-e, and anti-Fya were reported to require IUT in single cases.3 Significant advances in diagnostic tools for the management of red cell alloimmunization have occurred with the addition of genetic testing of the parents and fetus and the use of Doppler ultrasonography for the detection of fetal anemia.

Pregnant women routinely undergo red cell typing and an antibody screen at their first prenatal visit. Identification of an antibody associated with HDFN should result in a reflex determination of the maternal titer. Until recently, titers were performed manually by laboratory technicians using an indirect Coombs test on serial dilutions of the patient’s serum combined with indicator red cells. Gel technology now allows for automation of the process of performing antibody screens and determining antibody titers. Gel titers typically provide results 2 to 3 dilutions higher than conventional tube titers (e.g., 1:8 is found to be 1:64 with gel), making the threshold for a critical titer more difficult to determine.4 Obstetricians and maternal-fetal medicine specialists should discuss the results of a titer with their local blood bank to better understand the methodology and to decide if further fetal surveillance is warranted.

Paternal antigen and subsequent zygosity testing is an important next step in the evaluation process. An RhD-negative paternal blood type indicates the fetus is not at risk for HDFN as long as paternity is assured. DNA technology is now the preferred approach to determine if one or two copies of the paternal RhD gene are present.5 A heterozygous result (only one RhD gene present) indicates a 50% chance of an affected fetus. For other cases of red cell alloimmunization, paternal testing through serologic methods can still be used to determine zygosity. For example, a Kell-positive partner can have his red cells tested with anti-K and anti-k reagents. A reaction to anti-K indicates the individual is Kell positive. If the anti-k serology test is also positive, the individual is heterozygous for Kell, which is true for the majority of individuals. If the anti-k reaction is negative, the individual is homozygous for Kell, which is a rare phenotype. Direct DNA testing can also determine paternal zygosity in these cases.

Measurement of amniotic levels of bilirubin (DOD450), once the mainstay for surveillance of pregnancies at risk for HDFN, has been relegated to the annals of the history of Rh disease. Two decades have passed since the first reported use of a Doppler ultrasound measurement of the middle cerebral artery peak systolic velocity (MCA-PSV) of the fetus to detect moderate to severe anemia.8 Once a critical maternal titer has been reached in an alloimmunized pregnancy and the fetus is found to be at risk based on its antigen status, MCA Dopplers are performed every 1 to 2 weeks starting as early as 16 weeks’ gestation (see Figure). An increasing value that reaches a threshold of 1.5 multiples of the median for the corresponding gestational age warrants the need for cordocentesis and probable IUT. 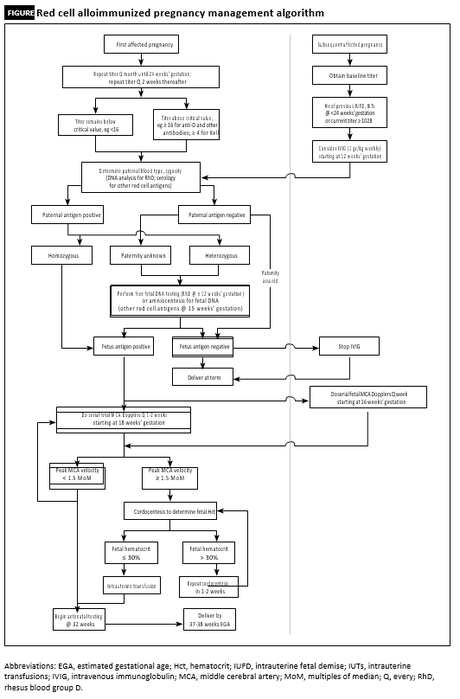 Since its introduction in the mid-1960s, IUT of compatible red cells to the anemic fetus has proven to be the most effective fetal therapy to date. In the mid-1980s, improvements in ultrasound technology allowed for direct access to the fetal circulation through a puncture of the umbilical vein at either the cord insertion into the placenta or as the vein courses through the fetal liver. Survival rates have improved to more than 95% in experienced centers with reports of complications in 1.2% of procedures.9The widespread adoption of the MCA-PSV to detect fetal anemia earlier in gestation before the onset of hydrops fetalis has probably been the major factor in improved outcomes.10 However, a growing concern is that the decreasing incidence of disease due to the implementation of antenatal and postpartum prophylaxis for RhD alloimmunization will lead to less training opportunities to maintain the availability of skilled fetal interventionists. A recent study found that between 30 and 50 IUT procedures were required for a physician in training to achieve an optimal perinatal outcome.11 An annual case rate of 10 procedures was required to maintain that expertise.

Early onset severe HDFN (EOS-HDFN) presents a greater challenge to even the most experienced fetal medicine specialist. In these cases, technical issues with the puncture of small diameter fetal vessels and a fragile fetal cardiovascular physiology contribute to a higher rate of perinatal mortality. Prior to 22 weeks’ gestation, fetal loss can complicate up to 20% of procedures.12Should a perinatal loss occur, the management of a subsequent pregnancy is even more difficult since fetal anemia typically occurs earlier in gestation. In such cases characterized by EOS-HDFN, nonspecific immunomodulation has been used in the form of intravenous immunoglobulin (IVIG) with or without the use of serial plasmapheresis to lower the maternal titer.13 Proposed mechanisms of action of IVIG include suppression of the maternal titer, partial placental blockade through competition for transport sites, and transplacental passage with suppression of the fetal reticuloendothelial system to decrease the phagocytosis of sensitized fetal red cells. In the PETIT retrospective study of 52 pregnancies affected with EOS-HDFN, standard treatment resulted in the onset of fetal anemia at the same gestational age or several weeks earlier than the antecedent pregnancy. In those patients treated with IVIG before 13 weeks’ gestation, a 25-day delay in the gestational age at first IUT was noted as compared to the previous pregnancy.14

IVIG therapy is costly and associated with significant maternal side effects and complications including headaches, aseptic meningitis, and hemolysis. Other reproductive options for women with a history of EOS-HDFN include surrogate pregnancy, donor sperm from an individual who is RhD negative, and adoption. Pre-implantation genetic testing (PGT-M) has been reported with a heterozygous paternal RhD genotype and is also an option for couples in which the male partner is heterozygous for RhD.15

Given the complexity and increased risk for adverse outcomes in such cases, a more targeted immunologic approach to HDFN is needed that will minimize or negate the risks associated with IUT. The offending maternal immunoglobulin G (IgG) in red cell alloimmunization is actively transported across the placenta through binding at the neonatal Fc receptor (FcRn). FcRn is also found on adult endothelial cells and is responsible for maintaining the circulating pool of IgG by preventing intracellular catabolism. Recently, several monoclonal antibodies have been developed that target this receptor in an effort to treat adult immunologic-based diseases such as myasthenia gravis. Such monoclonal therapy for red cell alloimmunization in pregnancy would have two beneficial actions: a decrease in the circulating maternal anti-red cell antibody titer and, more importantly, a blockade at the level of the placenta to protect the fetus. One such monoclonal antibody, nipocalimab (M281), is currently in a phase II clinical trial to evaluate its use in the treatment of EOS-HDFN (https://clinicaltrials.gov/ct2/show/nct03842189).

We await the results of this exciting trial which may well complete the mission I once proposed for red cell alloimmunization in pregnancy—the time has come to put the needles away.16

This article focuses on the pathophysiology underlying fetal/newborn allo- and autoimmune diseases, especially HDFN and the current/evolving diagnostic and treatment regimens for HDFN.