While use of contraception is nearly a universal experience in the United States, unintended pregnancy rates remain high.1,2 The recently approved contraceptive Phexxi™ (Evofem Biosciences, San Diego, CA; previously known as ACIDFORM/Amphora and originally approved by FDA as Instead Intimate Lubricant) adds a new class of method in the United States called a vaginal pH  modulator (VPM). Phexxi is non-hormonal, woman-controlled, coitally dependent, and is provided in a simple pre-filled applicator, which could increase overall contraceptive use and potentially reduce unintended pregnancy rates (Table 1).

Because Phexxi is compatible with other contraceptives, such as male or female condoms, diaphragms, cervical caps, and hormonal prescription contraception, it may reduce contraceptive failures. The Guttmacher Institute notes that most unintended pregnancies occur among couples who are not using a contraceptive method or those who are not using their method correctly and consistently.3 All contraceptives and all users of each method are not created equal. The difference in perfect- versus typical-use failure rates in contraceptive methods reflects several factors, including compliance with method instructions, drug-drug interactions, continuation of the method, coital frequency, and obesity/BMI. Increasing the contraceptive options for women is an important part of the public health imperative to ensure the healthiest possible pregnancy outcomes. The following article will review the mechanism of action of VPMs, the results of the pivotal clinical trials related to Phexxi approval, and the impact of contraceptive trial design on how contraceptive effectiveness is measured and communicated.

VPMs are spermicidal as a result of their ability to maintain the vaginal pH in its natural range of 3.5 to 4.5 where sperm are immobilized. In addition, when the vaginal pH is kept in this physiologic range, there is the potential to reduce the acquisition of sexually transmitted infections (STIs).4 A successful VPM candidate must not only maintain the acidic pH, but must also have a thick viscosity to prevent dilution due to vaginal secretions and ejaculate and must have bioadhesive properties be able to persist in the vagina for sufficient time to work.5 Each pre-filled, single-dose vaginal applicator of Phexxi (Evofem Biosciences, 2020) contains 5 g of gel with lactic acid (90 mg), citric acid (50 mg), and potassium bitartrate (20 mg) as active ingredients plus inactive ingredients such as a preservative (benzoic acid), gelling agents (alginic acid and xanthan gum), a humectant (glycerin), sodium hydroxide, and water.4,6 The gel is a dense, uniform consistency that is colorless to off-white and is designed to form a persistent barrier layer over the vaginal and cervical epithelium. It can be administered up to 1 hour before each act of vaginal intercourse but can also be inserted immediately before intercourse. It has been shown to immobilize sperm for at least 8 hours because it maintains viscosity and is bioadhesive to the vaginal epithelium such that it appears to still be present for at least 12 hours.5 Phexxi can be stored at room temperature and maintain stability for 2 years and can tolerate a higher temperature (40⁰ C) for up to 6 months.

Two separate phase 3, multicenter, open-label, randomized studies of Phexxi were conducted before FDA approval was granted. The initial trial was a 6-month (7 cycle) comparison to a 4% Nonoxynol-9 (N-9) vaginal gel (Conceptrol®, Revive Personal Products Company, Madison, NJ) where healthy subjects 18-45 years old were randomized to the VPM (n=1,665) vs. the N-9 (n=1,659). This initial trial was conducted from April 2011 through June 2014. The only published abstract of the results of this trial (ClinicalTrials.gov identifier: NCT01306331) demonstrated a cumulative pregnancy rate with the VPM of 10.5% (95% CI [8.6-11.9]) over the 6-month study period. A lower pregnancy rate of 4.1% (95% CI [8.6-12.3]) was noted among the 69% (n=1,153) of subjects who reported correct and consistent use of the product. These pregnancy rates were comparable to the subjects on N-9.7 A similar number of subjects discontinued the VPM (52.7%) and N-9 (54.3%) products before the 6-month study period was completed, but less than 2% in either group cited adverse events as the reason for discontinuation.

As a result of several factors, the FDA directed that a second phase 3 trial of Phexxi be done. This study (ClinicalTrials.gov identifier: NCT03243305) was conducted from July 2017 through November 2018 as an open-label, single-arm, multicenter trial restricted to women of reproductive potential 18 to 35 years of age with regular menstrual cycles (21 to 35 days). A total of 1,384 subjects were enrolled who agreed to engage in at least 3 acts of heterosexual, vaginal intercourse per cycle using the VPM as their method of contraception. Subjects were instructed to self-administer the pre-filled dose of Phexxi intravaginally up to one hour before each episode of intercourse for up to 7 cycles. The typical-use cumulative pregnancy rate as derived by Kaplan-Meier life-table analysis was 13.7% (95% CI [10.0%-17.5%]). The estimated Pearl Index, calculated based on data from the 7-cycle study after excluding cycles where backup contraception was used, cycles <21 days or >35 days in length, and cycles in which no intercourse was reported, was 27.5 (95% CI, 22.4% - 33.5%).8 In a separate analysis of this data set to provide data on perfect use vs. typical use during the 7-cycle follow-up period, cumulative pregnancy rates of 6.68% (95% CI [4.87-8.49]) and 11.31% (95% CI [8.92-13.70]), respectively, were found.9

When data from the two phase 3 studies are combined, a total of 2804 subjects had over 19,000 cycles of exposure. The overall racial/ethnic distribution was 66% white, 27% Black or African American, 2% Asian, 1% American Indian or Alaska Native, 0.3% Native Hawaiian or Pacific Islander, and 5% other; 32% of the study population was Hispanic. Of note, the first trial included a 1-year extension phase where 342 US subjects were exposed to Phexxi for 13 cycles. The most common adverse reactions were a vulvovaginal burning sensation (18.0%) and vulvovaginal pruritis (14.5%). The majority of these adverse reactions were mild and rarely led to discontinuation. See Table 2 for summary of the most common reactions (≥2%) reported by subjects.8 Less than 1% (n=10) of subjects experienced cystitis, pyelonephritis, or other upper urinary tract infections (UTI). For this reason, Phexxi is not recommended for women with a history of recurrent urinary tract infections or urinary tract abnormalities. 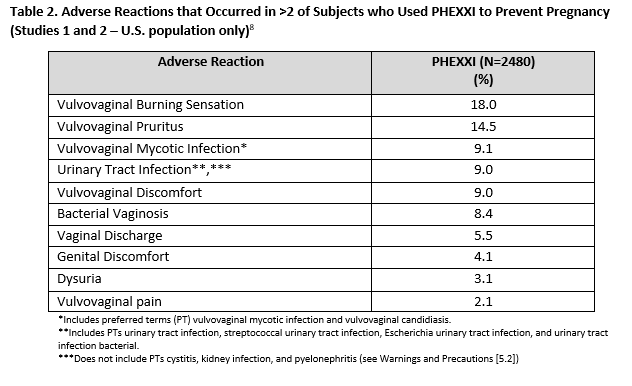 Because male partners of women using VPMs are exposed to the active ingredients, their experiences and adverse reactions have also been studied. A Phase 1 study of male tolerance was conducted using a 7-day randomized, double-masked, single-center trial comparing VPM to KY jelly among 36 participants who were instructed to apply 2 mL of the product to their penis at bedtime nightly and then wash it off 6-10 hours after application. Overall, 8.3% of male subjects exposed to VPM reported adverse events compared with 41.7% of KY jelly users who reported genital symptoms. The most commonly reported events from VPM users were tingling and dryness, but all were rated as mild; circumcision did not appear to impact these symptoms.5 Among male partners of subjects who were in the second Phase 3 trial of VPM for contraception, 9.8% (131 of 1,330) reported symptoms of local discomfort (burning, itching, pain, and “other”). Of these local discomfort symptoms, 74.7% were mild, 21.4% were moderate, and 3.9% were severe. Two subjects discontinued participation in the study due to male partner symptoms.8

Sexual Satisfaction with VPM Use

Women's satisfaction was evaluated in 1330 women (ITT population); almost half (46.5% 616/1325) of respondents indicated that they were “very satisfied” or “satisfied” with their contraceptive method prior to the study at enrollment/visit 2. Compared with women's satisfaction with their contraceptive method prior to enrollment, satisfaction with the study treatment nearly doubled; at visits 3, 4, and 5, 85%, 90%, and 82% of women surveyed, respectively, reported being “very satisfied” or “satisfied” (Figure 1). 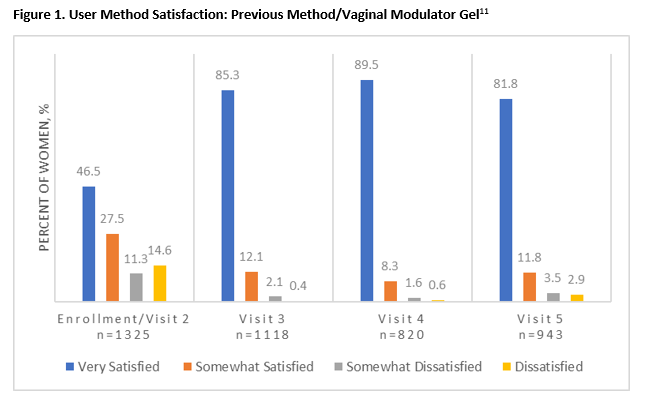 Contraceptive Effectiveness and Other Considerations

The manner in which we communicate “how well a contraceptive method works” to patients is just as important as how we describe the potential adverse effects. However, while it seems like some healthcare providers think that efficacy is the most important factor in people’s choices of method, it is not always clear that is true.12 Because the reproductive life plans of women and their partners are variable, complex, and complicated, it is important that the spectrum of available contraceptives reflects the myriad values of those who use them. Individuals and couples may have different priorities when considering the contraceptive method that works best for them and their family planning desires. Issues such as ease of use, expense, effectiveness, side effects, STI risk reduction, menstrual cycle control, and return to fertility are only some of the issues that are considered.13 As has been noted by others, it is not only important that healthcare providers and patients work together in a shared decision-making model to ensure that women are receiving the contraceptive methods that satisfy as many of these concerns as possible, but also that they take into account that the choices and reasons for those choices will change over time and as a result of many influences.14

As a result of the evolution of clinical trial design, guidance from the FDA, contraceptive method types, and data acquisition and analysis, it is difficult to easily compare different contraceptive trials.15 The FDA mandates that prescribing information include the Pearl Index as a measure of contraceptive efficacy. However, the Pearl Index may not reflect the true rate of pregnancy occurring while using that method as it includes cycles where no heterosexual vaginal intercourse occurred. The other commonly used method to calculate contraceptive failure in clinical trials is time-to-event analyses where the cumulative pregnancy rate is based on a survival analysis such as the Kaplan-Meier calculation. This kind of analysis allows for inclusion of each subject who had cycles considered evaluable for analysis (i.e., use of the VPM, vaginal intercourse, and cycle length parameters were met) from enrollment until exiting the study or becoming pregnant. The number of subjects still active in the study at the time a pregnancy was recognized is used to calculate the cumulative pregnancy rate. However, this may not be as clinically useful as typical-use failure rates, which are designed to describe the method’s effectiveness in real-world use despite imperfect compliance. Conversely, typical use may also include the combination of methods such as male condoms with VPM and/or simultaneous use of a hormonal contraceptive method.

Key advantages of VPMs include that they are potentially multifaceted interventions that can reduce the risks of pregnancy and/or STI exposure from vaginal intercourse. While it can be a stand-alone contraceptive method, it can also be used safely in conjunction with other methods to further reduce the risk of an unwanted pregnancy. Additionally, there may be significant noncontraceptive benefits such as potentially reducing STI risk and other causes of vaginitis. A current phase 2B, double-blind, placebo-controlled efficacy trial of VPM for the prevention of acquisition of urogenital Chlamydia trachomatis infection (ClinicalTrials.gov identifier: NCT03107377) has demonstrated encouraging results. There was a relative risk reduction of 50% in the rate of chlamydia among women who used the VPM for the 4-month study period (4.9%, n=14/288) compared to placebo (9.8%, n=28/287). Additionally, a 78% relative risk reduction was seen in reported cases of gonorrhea infection at 0.7% (n=2/280) among VPM users compared to 3.2% in the placebo arm (n=9/277, P = .03).16 These results are similar to prior evaluations of VPM for STI risk reduction.

Vaginal pH modulators are a novel way to reduce the risk of pregnancy and, potentially, STI acquisition without the concerns that are a part of hormonal contraceptives. As a woman-controlled, easy-to-use method that is only applied prior to heterosexual vaginal intercourse without restrictions related to BMI, it may be the perfect contraceptive method or adjunct to their current method for many women. Expanding the menu of contraceptive methods will hopefully increase overall contraceptive utilization. With improved contraceptive use and/or multi-method use, we may see significant progress in reducing the stubborn public health problem of high rates of unintended pregnancy. Phexxi, as the first FDA-approved VPM for contraception, represents a significant advancement in the options for women and couples who desire non-hormonal, non-implantable contraception.

This article will focus on VPMs, their attributes, and the methodology surrounding the determination of contraceptive effectiveness.