It’s been nearly three decades since Time Magazine’s memorable cover had the word “Herpes” emblazoned in red across the page with the caption “Today’s Scarlet Letter” and a grim-faced, heavily clothed couple beneath it. Since then, the stigma remains, and the incidence of genital herpes has blossomed. The CDC estimates there are 50 million infected adults in the U.S., making this one of the most prevalent STIs.1,2 Yet only one in 10 affected persons knows they have the infection, as many infected individuals have symptoms that have been attributed to other diagnoses. While the classic presentation of genital herpes is easier to diagnose, it is less common than the atypical presentation. The infection often recurs, and asymptomatic shedding is common. The disease is relatively easy to transmit to others, and transmission frequently occurs in the absence of symptoms. The diagnosis of herpes can result in significant physical and emotional consequences as well as potential harm to newborns. Since the Time article, effective pharmacologic therapy has become available but can only be offered to patients if the diagnosis is made, which is why it is essential that healthcare practitioners are aware of who, when, and how to screen. 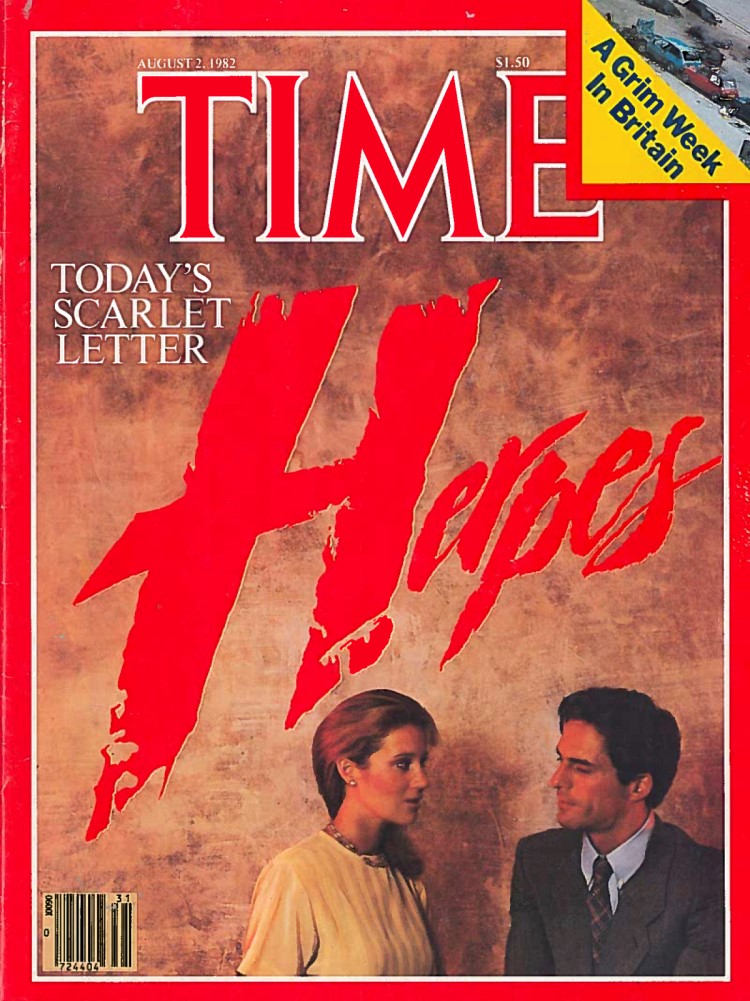 TIME Cover © 1982 Time Inc.  TIME and the Red Border Design are trademarks of Time Inc., registered in the U.S. and other countries.  Used with permission.

Herpes simplex 1 (HSV-1), or “oral herpes,” causes cold sores or fever blisters. Initial oral infections frequently occur in childhood with the majority of adults exhibiting antibodies to the virus. The virus often recurs around the lips or facial area frequently associated with stress or illness. Persons may contract HSV-1 in the genitals by oral or other anogenital sex. About 30% to 50% of newly diagnosed primary genital HSV infections are Type 1. Reinfection infrequently recurs or sheds from the genitals after the first infection and carries less long-term implications. However, contracting HSV-1 infection late in pregnancy can cause a severe neonatal herpes infection.

Data from the 2005-2010 National Health and Nutrition Examination Survey indicate that the prevalence of HSV-2 infection ranges from 1.2% in adolescents aged 14 to 19 years to 25.6% in adults aged 40 to 49 years; the prevalence in women is twice that of men.8 HSV becomes dormant in the body after the initial infection only to later reactivate or cause asymptomatic shedding and transmission to others.

A primary episode occurs on first infection with the virus in the absence of circulating antibodies. Any symptomatic episode after the development of antibodies is considered a recurrence. The appearance of primary genital herpes infection is quite characteristic, first starting as vesicles and then becoming painful ulcerations and sores in the genital region. Sores or ulcerations can cause dysuria, itching,  discharge, and local lymphadenopathy, which is associated with malaise, fever, headache, and fatigue. This may last 2 to 3 weeks if not treated. However, most primary infections are asymptomatic or minor and cause internal genital lesions that are not recognized. Persons with prior oral HSV-1 infection may exhibit minimal symptoms because of the ameliorating effects of their HSV-1 antibodies. Even though HSV-1 antibodies do not protect against infection with HSV-2, they can modify the symptomatic response to HSV-2 infection.

After the initial infection, the virus retreats down the sensory nerves and sets up residence in the lower spine ganglia. Later, the virus may travel back up the sensory nerves and cause symptoms in genital or extragenital sites, such as the lower abdominal wall, rectum or anus, buttocks, or thighs. Genital recurrences are almost always due to HSV-2. The diagnosis of a primary infection requires simultaneous serologic testing for HSV antibodies. Occasionally, a severe episode with systemic symptoms may actually be a recurrence, in which the primary episode was either asymptomatic or presented as a minor lesion without symptoms.

The 2015 CDC STD Guidelines state: “Most persons infected with HSV-2 have not had the condition diagnosed. Many such persons have mild or unrecognized infections but shed virus intermittently in the anogenital area. As a result, most genital herpes infections are transmitted by persons unaware that they have the infection or who are asymptomatic when transmission occurs.1”

Occasionally, HSV causes lesions or infections of the fingers [a Whitlow]. HSV-1 is the cause in approximately 60% of cases of herpetic whitlow, and HSV-2 is the cause in the remaining 40%. Although it is more rare, infections can also occur on the cornea or in the nervous system. Infants can be infected in utero or at delivery if significantly exposed to the virus. Neonatal infections can cause meningitis, blindness, and even death.

Most primary infections go unrecognized. Recurrences may be erroneously diagnosed as recurrent yeast or UTI, shaving irritation, sexual friction, or allergy to latex or soap. Recurrences may look like an abrasion or fissure, either of which should be considered herpes until proven otherwise. There may only be itching or vaginal discharge with no obvious lesions or only introital or labial redness. Anal symptoms are often attributed to hemorrhoids or pinworms, and skin lesions on the thighs, abdomen, or buttocks are often diagnosed as furuncles, ingrown hairs, spider bites, poison ivy, or heat rash.13 Genital herpes needs to be included in differential diagnosis of any recurrent genital or regional cutaneous symptoms. 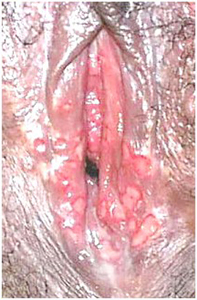 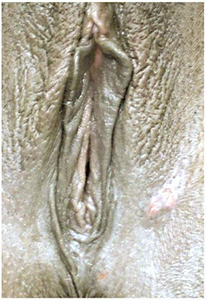 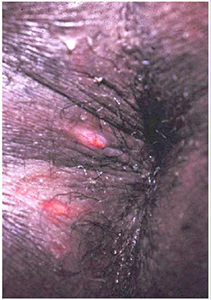 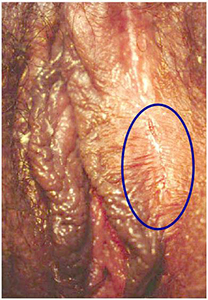 The CDC states1 “the clinical diagnosis of genital herpes is both insensitive and nonspecific.” The WHO concurs and states, in part:14

Laboratory methods for the diagnosis of HSV-2 [and differentiation from HSV-1) include direct detection from lesions and indirect serological methods. Available tests include antigen detection, isolation of virus by culture, and nucleic acid amplification tests (NAATs) for viral DNA. Serological assays are also available to screen by detection of type-specific antibodies, which develop in the first several weeks after initial infection and persist indefinitely.

As alluded to, HSV culture was long considered the gold standard for testing of a visible lesion. However, there is a high false-negative rate if inadequate numbers of viral particles are being shed. Polymerase chain reaction (PCR) testing for the presence of HSV DNA is significantly more sensitive than culture and routinely differentiates between HSV-1 and HSV-2. Although a positive culture or PCR is definitive, a negative test does not rule out herpes. Cytology is not helpful.1,15-17 For type-specific HSV-1 and HSV-2 IgG tests, the CDC notes that false negatives are more likely in the early stages of infection.1 By contrast, herpes IgM testing is notuseful. Western Blot testing is considered the gold standard of serologic testing. The Aptima HSV-1 and 2 assay qualitatively detects and differentiates between HSV-1 and HSV-2 (Hologic; San Diego, CA). The assay is a NAAT for the qualitative detection and differentiation of HSV-1 and HSV-2 in clinician-collected swab specimens from anogenital skin lesions. Specimens collected in a broad range of transport media, including the Aptima specimen transport medium, can be tested with the assay.1,6,18-22 NAATs are increasingly preferred due to higher sensitivity, ease of specimen collection and transportation, and faster results.14

Most patients diagnosed with herpes react with shock and disbelief, though some respond with less surprise because they had wondered if they had a herpes infection due to prior known exposures or symptoms. Often, patients want to know when, how, and why. Much of the management of a herpes diagnosis involves helping them learn about their infection, answering those questions that can be answered, and explaining those that cannot. There are often misconceptions about the diagnosis as well, such as that viral infection causes cancer (it does not) or that it means they can never have children or deliver vaginally (untrue). Patients also often fear that they will never be able to have a normal sex life or have another intimate relationship (also untrue). There may be anger at having become infected, and there are appropriate fears about transmission to future partners. This is why counseling and education are vitally important. Patients should be advised about partner notification, risk of asymptomatic viral shedding and transmission, and dispelling misconceptions. Patients also need to be informed that there are effective and safe medications available that not only help treat and control the infection, but also  reduce the risk of transmission to an uninfected partner. Additional education on appropriate use of condoms should be provided, and excellent websites and hotlines are available for patient education as well as written materials.

In 2016, the USPSTF published a statement on HSV testing.3,23 It noted that “genital herpes is a prevalent sexually transmitted infection in the United States, occurring in almost 1 in 6 persons aged 14 to 49 years” and “reviewed the evidence on the accuracy, benefits, and harms of serologic screening for HSV-2 infection in asymptomatic persons, as well as the effectiveness and harms of preventive medications and behavioral counseling interventions to reduce future symptomatic episodes and transmission to others.”

The USPSTF concluded “that the harms outweigh the benefits for population-based screening for genital HSV infection in asymptomatic adolescents and adults, including those who are pregnant, largely based on concerns about the risk of a false positive screen with the currently available tests (specificity)and the potential anxiety and disruption of personal relationships related to diagnosis.” They recommended “further development of screening and diagnostic tests with higher specificity that detect both asymptomatic genital HSV-1 and HSV-2 infections.”

The USPSTF also recommended “intensive behavioral counseling interventions to reduce the likelihood of acquiring an STI for all sexually active adolescents and for adults at increased risk.”  It then acknowledged that “persons with genital herpes can spread the infection to sexual partners even when they are asymptomatic.” Studies suggest that up to 85% of persons who are found to be infected with HSV-2 and who report no prior symptoms of genital herpes have a symptomatic outbreak within 6 months of being tested. Patients who receive education about genital herpes may be more likely to recognize and report its symptoms. Some patients who are considered ‘asymptomatic’ may have actually experienced symptoms but are not aware they have a genital herpes infection.

The mainstay of therapy is antiviral medications, including acyclovir, valacylovir, and famciclovir, that interact with viral thymidine kinase and stop viral replication. Each drug has a specific dose range for treatment primary episodes, recurrent episodes, and suppression of recurrences.1 Recommendations for patient treatment and counseling can be accessed via the CDC website at:  https://www.cdc.gov/std/tg2015/herpes.htm

Some healthcare practitioners are hesitant to provide testing for herpes. The concern is the belief that patients are better off not knowing they have been infected because of the associated emotional issues and stigma. However, what a patient does not know can be detrimental because knowledge is power. With an accurate diagnosis, appropriate treatment can be provided for typical as well as atypical presentations. In addition, an accurate diagnosis prevents misdiagnoses, unnecessary treatments, and potential transmission to others or to newborns. Thanks to diagnostic advances, genital HSV-1 infections can be differentiated from genital HSV-2 infections, and appropriate counseling can—and should—be provided to patients, who  expect to receive an accurate diagnosis with appropriate therapy, even when it may involve emotional distress or awkwardness on their part or the provider’s. Informing patients about their HSV status is essential when performing STD screens. Patients should be advised of the risk of false positive serologic testing, that results need to be interpreted carefully, and if necessary, confirmed with additional testing. Infection with HSV-2 is the most prevalent STD. If both HSV-1 and HSV-2 serologic screening is not performed when a patient requests STD testing, the patient should be fully informed to ensure they do not erroneously inform partners that they have been screened for “everything."

Case Studies From the Author’s Practice

38
Leaving so soon? Let us know why.
38
Dr. Gandell reviews and evaluates topics regarding HSV 1 and HSV 2.