The rate of unintended pregnancies has decreased dramatically in recent years, from 51% in 2008 to 45% in 2011.1 This is the first profound decrease in unintended pregnancies in the last several decades and extends to diverse demography characterized by different ages, races, and ethnicities. Much of the decrease is due to improvements in contraceptive counseling and incorporation of long-acting reversible contraceptive (LARC) methods (primarily IUDs and implants) into routine practice as first-line mainstream options for contraception. This increased use of LARCs results from several factors, notably the vast literature demonstrating the effectiveness and safety of LARCs and their increased availability and insurance coverage.

LARC contraception methods are highly effective, with failure rates <1% in typical use.2 The CHOICE study reported a profound, 20-fold decrease in unintended pregnancy rates for LARC methods versus short-term methods (i.e., pills, ring, and patch).3 Although LARC methods are clearly effective, there may be particular reasons for use of other approaches, such as uncertainty in the planning of future pregnancies, changes in relationship status, or a desire to reduce ovarian cancer risk.

Several aspects of contraceptive care have become part of routine practice although they are not included in the prescribing information for contraceptives. Same-day initiation of contraception is appropriate for women who are not pregnant. It is not necessary to test for sexually transmitted infections (STIs) before IUD placement. Clinical experience has shown that IUD use is not associated with profound increases in pelvic inflammatory disease (PID).4 If a woman with an IUD develops PID, initial treatment for most infections can be undertaken with the IUD in place.5

In women who have just delivered a child and desire contraception, an IUD can be placed immediately postpartum. The advantages of this approach include: substantial reduction in 12-month pregnancy rates,6 no interference with breastfeeding, no need for a separate visit for insertion, and minimal time required for insertion. However, IUDs have higher expulsion rates when inserted immediately postpartum.

In adolescent women, the American College of Obstetricians and Gynecologists (ACOG) and American Academy of Pediatrics (AAP) Committee on Adolescents both recommend LARC methods as first-line contraceptive choices.7,8 The CHOICE study, in which 9,256 adolescent women were provided with free contraception with counseling, found that when cost and access issues were removed, 75% of study subjects chose LARC methods. These women had a substantially lower pregnancy rate and higher continuation rates than women who chose other methods.9

For shared decision-making about contraception, the discussion should be focused on the woman in your office. It is important to understand what matters most to the patient. In general, the discussion should help the patient understand the wide range of options available. The table summarizes insights into shared decision-making and the related recommendations (Table 1).

Table 1: Insights and Recommendations for Counseling Teens and Young Women on Contraceptive Options 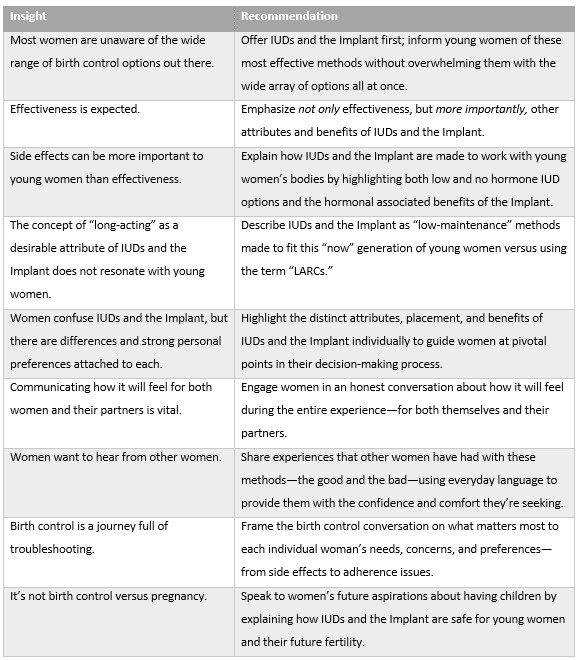 There are still substantial barriers to the use of LARCs. Key barriers include clinicians’ lack of training and experience in placement and removal of the devices, access, affordability and coverage issues, patient misinformation and lack of trust in the health care system, and clinician misinformation about safety, acceptability, and mechanism of action. The bottom line is that LARCs are the most effective reversible method for contraception. Contraception should be offered to all candidates who are not actively seeking pregnancy, with methods offered based on the US Medical Eligibility Criteria (MEC). US clinicians who offer contraception need to minimize or eliminate barriers with effective counseling based on a comprehensive, patient-based process, and same-day initiation when appropriate.

In recent years, placement of implants over the triceps rather than between the bicep and triceps has become standard practice.10 In addition, data shows that implants are clearly effective in women with a BMI >30 kg/m2. Implants tend to improve dysmenorrhea. However, bleeding issues are a potential problem, although <12% of women in US trials discontinued implant use due to bleeding.11 Management of unscheduled bleeding may include NSAIDs, tranexamic acid, or various second-line therapies.12 Counseling is critical to successful long-term implant use.

For copper-based IUDs, data show that the timing of placement has little impact on safety, efficacy, or continuation rates and that same-day placement is appropriate.15 Copper-based IUDs are considered the most effective emergency contraceptive and are highly effective for nulliparous women. Pain with placement is common, and no prophylactic treatments have been found effective.16-18 NSAIDs can reduce cramping and bleeding.19 A study by Heinemann et al found that copper-based IUDs are slightly less effective than levonorgestrel-based IUDs, probably because local progestin release by the hormone-containing IUD increases the thickness and tenacity of the cervical mucus barrier to sperm penetration.20

For levonorgestrel-based IUDs, the high-dose LNG 20 mcg/24 hr (Mirena) device can be implanted on the same day (with 7 days of backup contraception if not on menses), including postpartum and post-abortal placement, and can be used by nulliparous women.21,22 For the management of heavy menstrual bleeding, the device is the most effective available medical treatment as it provides outcomes similar to ablation and quality of life improvements equivalent to hysterectomy.23,24 Data on extended use of the 20 mcg/24 hr device from the CHOICE study identified 2 pregnancies among 496 women during years 6 and 7 of follow up, with failure rates of 0.25% and 0.43% per 100 women years at year 6 and 7, respectively.13

Two lower-dose intrauterine systems (IUSs) are available. They have very high contraceptive effectiveness with somewhat different side effect profiles and duration of effect because of the lower progestin dose. They are smaller in size and may be easier to implant than the higher dose devices. The LNG 18.6 mcg/24 hr (Liletta) device is approved for up to 4 years of use but is likely to have a longer duration of effect. In general, all of these devices are highly effective, with increased rates of amenorrhea for higher-dose devices.

In summary, barriers and challenges to contraceptive access and use still exist, and these common misperceptions related to contraception persist: LARCs are seen as invasive, pills and condoms are believed to be more effective than actual effectiveness, pills are believed to be more hazardous than pregnancy, and the belief that contraceptives are abortifacients. Despite these barriers, LARC devices meet women’s needs for contraception. They are safe, highly effective, tolerable, cost effective, convenient, and reversible.

Shared decision-making can have a critical impact on long-term contraceptive success for our female patients.