Although the first reported association of Mycoplasma genitalium (M. genitalium) with inflammatory urogenital disease was over 35 years ago,1 we have just begun to appreciate the clinical significance of this pathogen as a sexually transmitted infection (STI) in the last 15 years. Recently, M. genitalium has been labeled as an “emerging” STI.2M. genitalium was originally isolated from men with urethritis1 and since then has been strongly linked to non-gonococcal urethritis (NGU).3,4 In women, M. genitalium infection has now been strongly linked to cervicitis, and there is also evidence that it may lead to reproductive complications, including pelvic inflammatory disease (PID) and tubal factor infertility; evidence supporting that the infection causes perinatal complications is more limited.3-5M. genitalium infection may also be asymptomatic in men and women, and the natural history and clinical consequences of untreated asymptomatic infection remains to be elucidated.

One of the driving forces behind the emergence of this infection has been the development of nucleic acid amplification tests (NAATs), such as PCR, that have provided the means to detect M. genitalium in specimens collected from general- and clinic-based populations. Because of the challenges of growing M. genitalium in culture, there was no M. genitalium test readily available for clinical or research applications prior to the availability of NAATs. Before 2019, the M. genitalium NAATs available in the U.S. were research-based. However, to date in 2019, there are now two commercially available FDA-cleared NAATs for M. genitalium detection. Their availability should contribute to advancement of our knowledge on the natural history of the infection and its morbidity. Such knowledge is essential in the consideration of screening guidelines for M. genitalium, especially since there are no current screening recommendations for M. genitalium in the U.S. The 2015 CDC STD Treatment Guidelines recommends to consider M. genitalium as a possible etiology for recurrent or persistent urethritis, cervicitis, and PID in your approach to managing these cases.2 Golden and colleagues discussed European M. genitalium testing guidelines along with proposed Public Health Guidelines from Washington State as evidence of the urgent need to identify and quickly manage M. genitalium infection in the U.S.6 Contributing to this urgency is the rapid development of macrolide resistance among M. genitalium strains.3,7-13 Of greater concern is the emergence of M. genitalium strains with fluoroquinolone resistance, 9,10,14-16  which may be associated with M. genitalium infection treatment failure in patients treated with moxifloxacin,15,16 and the lack of consistently effective treatments in the U.S for M. genitalium infections failing macrolide and fluoroquinolone treatments. All of these challenges make it that much more important for healthcare professionals to be aware of this emerging STI and of optimal screening and treatment strategies.

Epidemiology and Burden of Disease with M. genitalium Infection

In 1981, Tully and colleagues reported cell culture isolation of a new mycoplasma from the urogenital tract of 2 of 13 men with NGU.1 In 1983, this new mycoplasma was named a new species, M. genitalium.17M. genitalium is highly fastidious in culture and can take anywhere from weeks to months to grow. For this reason, there had been sparse clinical data on M. genitalium infection until the last 15 years. With the development of research-based (“in-house”) M. genitalium NAATs, studies began to emerge on the prevalence of the infection, risk factors, clinical manifestations, natural history, and treatment outcomes.

While M. genitalium infections are often asymptomatic, some can present with clinical syndromes that are also seen with chlamydia and gonorrhea. Therefore, specific testing for M. genitalium is required to confirm the bacteria as an etiology for the syndrome. Testing for other STIs is also necessary since co-infection of M. genitalium with other pathogens can occur (albeit infrequent)8, and different etiologies may require different treatments.

In men, numerous studies have demonstrated a strong association of M. genitalium with symptomatic acute NGU, particularly nonchlamydial NGU (Figure 1).4 M. genitalium has been detected by PCR in 15% to 25% of symptomatic NGU cases and about 30% of cases of persistent or recurrent urethritis.2,4 There are sparse data that M. genitalium urethritis in men is complicated by epididymitis.2,4M. genitalium has also been detected in anorectal samples, usually in individuals without rectal symptoms.2,4 However, the bacteria has been reported as a cause of proctitis in men who have sex with men (MSM).24 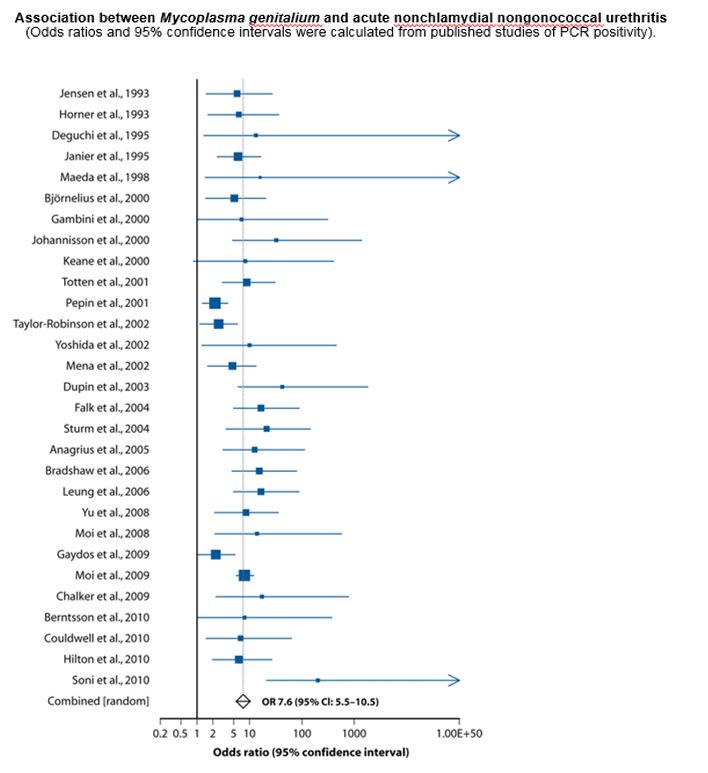 Numerous studies have shown an etiologic association between infection with M. genitalium and cervicitis (Figure 2).4 The bacteria has been detected in 15% to 30% of women presenting with clinical cervicitis as well as in women with persistent or recurrent cervicitis.2 There is evidence that M. genitalium infection can ascend to the upper genital tract in women resulting in PID. A study by Baczynska and colleagues demonstrated that human fallopian tube cells can be infected with M. genitalium, leading to inflammation and damaged cilia.25 Animal studies revealed that M. genitalium can also infect and cause inflammation of the upper genital tract.26,27 Cohen and colleagues presented data that M. genitalium was detected in endometrium and/or fallopian tube tissue from women with salpingitis.28 Several other human studies strongly supported M. genitalium infection in the development of PID.5M. genitalium has also been associated with an approximate 2-fold increased risk for spontaneous abortion, preterm birth, and infertility.5 Although these associations are based on weaker evidence and with some studies having contradictory findings, awareness of the risks associated with M. genitalium infection continue to grow and have become more clinically concerning.5 In addition to the above clinical syndromes, M. genitalium has been associated with over a 2-fold increased risk for HIV infection.29 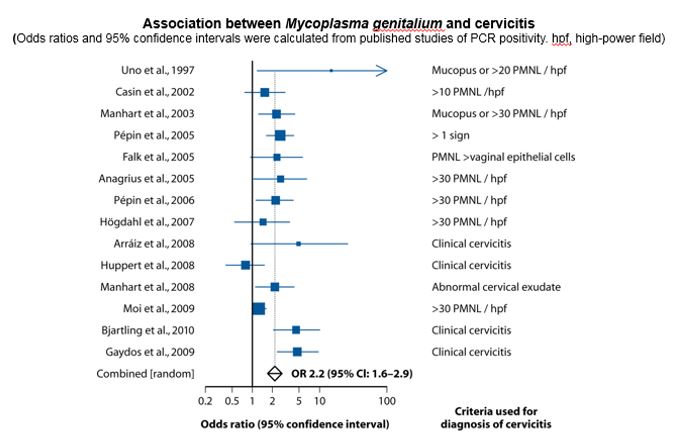 Prior to 2019, there were no FDA-cleared M. genitalium assays available in the U. S.;  there were, however, highly sensitive and specific research-based M. genitalium NAATs being used primarily for research purposes rather than clinical management.8-10,33,34-39 At this time two M. genitalium NAATs have   become FDA-cleared for testing on female and male urogenital specimens in 2019: the Hologic Aptima® Mycoplasma genitalium assay, which is an assay based on transcription-mediated amplification of M. genitalium-specific 16S rRNA, and the Roche cobas® TV/MG assay, which is a multiplex assay that detects M. genitalium mgpB “A” and “EF” regions (and can also be used to test for Trichomonas vaginalis if indicated). Neither of these assays test for the macrolide resistance-associated mutations in the 23S rRNA gene. There are other M. genitalium NAATs currently being investigated in the U.S.

Screening for M. genitalium infections is not recommended in the 2015 CDC STD Treatment Guidelines, which only recommends considering M. genitalium in cases of recurrent or persistent urethritis, cervicitis, or PID, and testing could be performed in such instances if a validated test was available to help guide treatment decisions.2 However, the 2020 CDC STD Treatment Guidelines preparations are underway, and with the availability of new evidence and FDA-cleared M. genitalium tests, it is possible that M. genitalium testing recommendations could change from those in the 2015 Guidelines. Testing for M. genitalium at the time of initial evaluation of urethritis, cervicitis, and PID may not only help guide therapy, but could also improve clinical outcomes and limit the development of antibiotic-resistant M. genitalium strains.

The three classes of antibiotics traditionally used to treat mycoplasmas are tetracyclines (e.g., doxycycline), macrolides (e.g., azithromycin), and quinolones (e.g., moxifloxacin). Doxycycline has been ineffective against M. genitalium NGU and cervicitis with median microbial cure rates under 50%.3 Limited doxycycline efficacy does not appear to be due to resistance.38 Azithromycin 1 g has been the first-line antibiotic treatment regimen for M. genitalium infections in the U.S. (often empirically used for urethritis and cervicitis treatment), but the microbial cure rates of azithromycin 1 g for urogenital M. genitalium infections have been declining since 2009. This has been demonstrated over the course of three randomized controlled NGU treatment trials (Figure 3)38 and in a meta-analysis of M. genitalium treatment consisting of mostly observational data (Figure 4).39 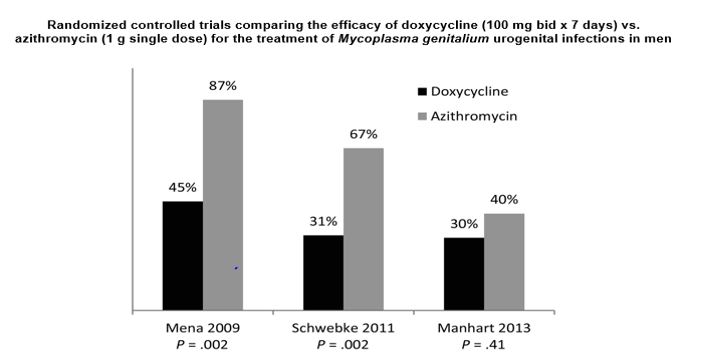 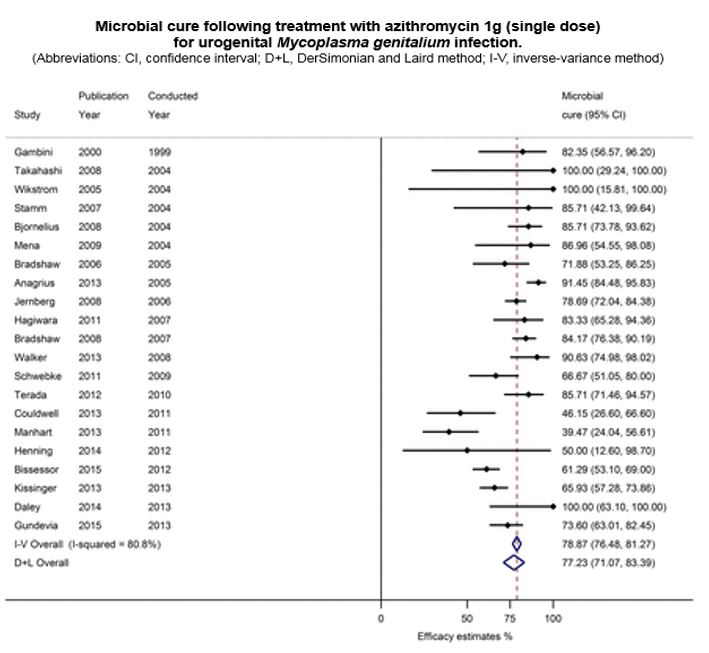 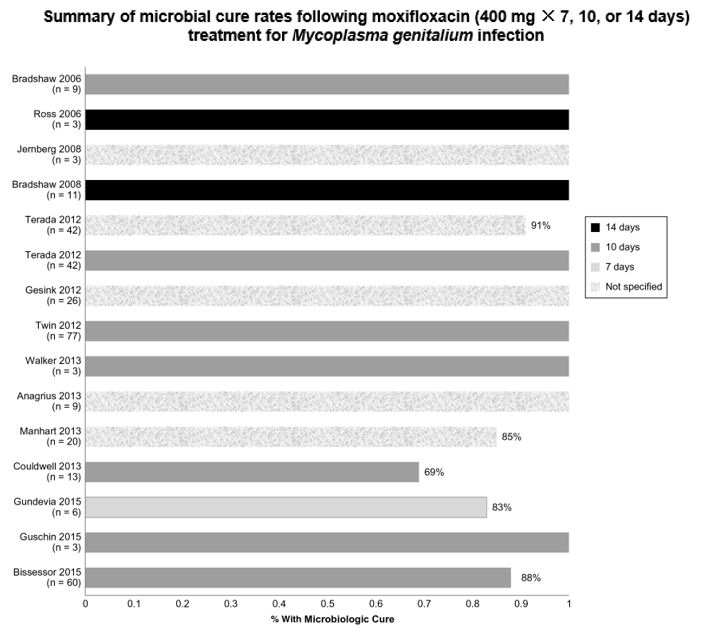 There is no guidance at this time on how to best manage M. genitalium infections in individuals in the U.S. who have failed azithromycin and moxifloxacin due to resistance. There have been two publications that have described a total of 4 cases of men with M. genitalium urethritis who failed moxifloxacin with strains that were quinolone- and macrolide-resistant and who were then cured with minocycline 100 mg given twice a day for 14 days.45,46 While minocycline is available in the U.S., there is insufficient data on its efficacy for M. genitalium infections at this time to consider it a first-line recommended treatment. There is a newer tetracycline drug, omadacycline, now available in the U.S.; however, its in vitro activity and clinical effectiveness for M. genitalium is unknown. There is also a new pleuromutilin class antibiotic, lefamulin, that has been demonstrated to have good in vitro activity against M. genitalium47 and was just FDA approved for the treatment of community-acquired bacterial pneumonia. However, lefamulin’s efficacy for the treatment of M. genitalium infections has not been studied.

With the propensity of M. genitalium for developing resistance, a novel resistance testing-based sequential treatment approach has become recommended in Australian and United Kingdom treatment guidelines in which uncomplicated M. genitalium infection (e.g. urethritis or cervicitis) is initially treated with doxycycline (100 mg twice daily for 7 days) to lower the bacterial load. That is followed by treatment with either azithromycin (regimens differ by guidelines, but include 1g first day, then 500mg daily for 2 or 3 days) or moxifloxacin (400mg daily dose with differing duration by guidelines, either for 7 or 10 days) depending on the results of testing for macrolide resistance-associated mutations.48,49 In the absence of availability of macrolide resistance testing, the choice of azithromycin vs. moxifloxacin would be based on local resistance rates and other patient clinical considerations. The success of this resistance testing-guided sequential treatment strategy, in terms of high M. genitalium cure rates and lower resistance development on treatment, has been reported in a study of men and women with M. genitalium infections who were treated at the Melbourne Sexual Health Centre.50 It remains to be determined whether this novel M. genitalium treatment strategy will be adopted into the upcoming CDC STD Treatment Guidelines.

34
Leaving so soon? Let us know why.
34
Dr. Geisler reviews the history of mycoplasma genitalium, as well as new testing methods and treatment options.