Overcoming Barriers to Talking with Your Patients About Hypoactive Sexual Desire Disorder (HSDD): Screening Tools and Advances in Its Treatment

Overcoming Barriers to Talking with Your Patients About Hypoactive Sexual Desire Disorder (HSDD):
Screening Tools and Advances in Its Treatment

Discussing sexuality concerns with patients is often daunting for most clinicians. Patients expect that their clinicians recognize and discuss such issues, while providers expect their patients to raise any complaints. Multiple barriers persist that minimize routine discussion about sexual health—from a need to focus on illness versus quality of life concerns, to embarrassment and lack of knowledge (among both patients and providers), to the misperception that sexual concerns are normal. Consequently, female sexual dysfunction is not being recognized and addressed in routine gynecologic and primary care, leading many women, and their partners, to suffer in silence.

With hypoactive sexual desire disorder (HSDD), the challenges in discussing and managing female sexual dysfunctions are exacerbated by confusion over the term and its diagnosis. The American Psychiatric Association (APA) DSM-IV-TR defined HSDD as the “persistent or recurrent deficiency or absence of sexual thoughts, fantasies and/or desire for, or receptivity to, sexual activity” that is accompanied by clinically significant personal distress or interpersonal difficulties and that is not otherwise accounted for by another medical disorder, drug or medication, or psychiatric condition.1 DSM-5, which was the most recent iteration of DSM, abolished HSDD as a unique diagnosis, combining problems with desire and arousal as a new diagnostic category.2 Nevertheless, the FDA recognizes the diagnostic criteria of HSDD as those delineated in DSM-IV for treatment indications. Recently, the International Society for the Study of Women’s Sexual Health (ISSWSH) developed a definition to better identify HSDD for clinicians. According to ISSWSH, a diagnosis of HSDD requires any of the following for at least 6 months: (1) lack of motivation for sexual activity manifested by either reduced or absent spontaneous desire (sexual thoughts, fantasies) or reduced or absent responsive desire to erotic cues and stimulation or inability to maintain desire; or (2) loss of desire to initiate or participate, including behavioral responses such as avoidance, not secondary to a sexual pain disorder; either/both of which is accompanied by clinically significant personal distress that includes frustration, grief, incompetence, loss, sorrow, or worry.3

Data indicates a generally high prevalence of sexual dysfunction, and particularly HSDD. The Prevalence of Female Sexual Problems Associated with Distress and Determinants of Treatment Seeking, or PRESIDE Survey, involved nearly 31,600 adult women in the US. It reported that 43% of women had problems with desire, arousal, and orgasm.4 Nearly 38% of women reported low desire, and 9.5% reported low desire with distress (or HSDD).4 More recently, 450 pre/post-menopausal women with self-described low sexual desire responded to an online survey; 69% of premenopausal respondents indicated their low sexual desire impacted their body image, 51% indicated it affected their self-confidence, and 33% indicated it influenced their self-worth.5

As can be seen in Figure 1, the biopsychosocial model highlights the numerous factors involved in health or dysfunctional sexual activity.6,7 Biologic factors include neuroendocrine mechanisms, hormones, and neurotransmitters; psychological factors include depression, anxiety disorder, performance anxiety; sociocultural factors include religious/cultural beliefs and social pressure. In addition, interpersonal factors, such as the quality of the relationship and life stressors, can facilitate or inhibit sexual functioning. HSDD represents a loss of interest in sex that used to be pleasurable and the loss of motivation to seek it out.

Two models—Bancroft’s dual control model and Perelman’s Tipping Point model—each propose that sexual arousal is experienced if the balance between excitatory versus inhibitory factors (biological and psychological) is tipped towards excitatory (Figure 2).8,9 Dopamine, oxytocin, melanocortin, vasopressin, and norepinephrine support excitation, whereas serotonin, opioids, and endocannabinoids support inhibition. Psychological or interpersonal factors are straightforward regarding their support or inhibition of desire.

Figure 2: Etiology of HSDD Imbalance Between Excitation and Inhibition8,9 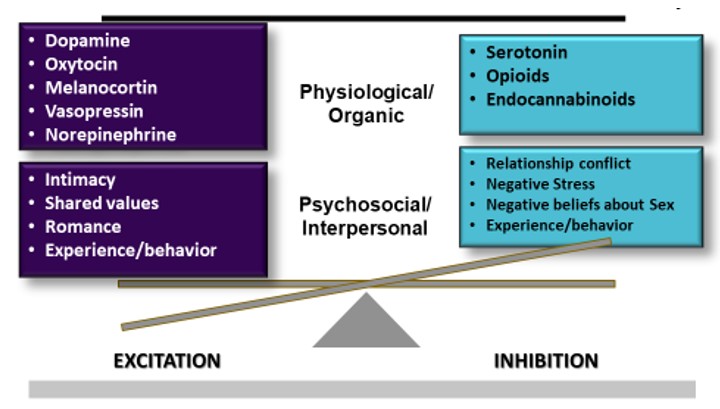 Barriers to Raising and Discussing HSDD

Women do not understand that HSDD is a medical condition. Recent evidence indicates 80% of women with self-reported HSDD do not mention it to a health care provider, and 50% reported that discomfort or embarrassment contributes to their unwillingness to seek treatment.5,10 A study of 53 primary care physicians reported 86.3% had not screened for low libido, in large part owing to little (38%)/no (53%) confidence in this topic.11 In a survey of 1,154 US obstetrician/gynecologists (53% male; mean age 48 years) regarding their practices of communication with patients about sex, 63% routinely asked about sexual activities.12 Not surprisingly, female physicians were twice as likely to ask as their male counterparts.

There are numerous clinician-based barriers that may interfere with asking patients about their sexual functioning.13-15 Clinicians lack sexuality training, leading to inadequate knowledge of solutions for sexual problems and associated comorbidities. Clinicians may also be embarrassed or concerned about embarrassing their patients. In addition, clinicians are most likely not aware of the prevalence of HSDD and fail to consider this sexuality-related issue as a high-patient priority.

The Use of Validated Screening Tools

It is important for clinicians to identify and appropriately manage those 1 in 10 female patients presenting with HSDD. One approach is to routinely integrate a few questions about sexual health and functioning into each exam. Additionally, there are a number of validated measures to aid clinicians in screening for HSDD (Table 1). The Decreased Sexual Desire Screener (DSDS) is a brief diagnostic tool for HSDD (Table 2).16 The Female Sexual Function Index (FSFI) assesses desire, arousal, orgasm, and pain;17,18 and the Female Sexual Distress Scale-Revised (FSDS-R) specifically assesses distress.19 The DSDS can easily be integrated into an office visit and helps rule out comorbidity, medications, or other potential symptom contributors. Patients whose screening results are suggestive of HSDD may be referred for psychotherapy/sexuality therapy and/or treated with available pharmacotherapies.

The first approved agent is flibanserin, a once-nightly, mixed serotonin agonist/antagonist.20 Flibanserin has positive effects on HT1A serotonin, facilitating positive prosexual effects; it blocks/inhibits 5HT2A signaling, which activates dopamine, a very prosexual neurotransmitter.21 Together, these effects help ‘tip’ the patient toward excitation.22,23 However, it does not afford immediate benefits; patients who do not respond within the first 8 weeks are recommended to discontinue usage. Studies using the FSFI Desire Domain demonstrated that flibanserin significantly increased desire and reduced distress (Figure 3; Figure 4).22-24 Approval of flibanserin still carries a REMS Medication Guide but no longer requires clinician certification and an alcohol restriction.  Package labeling now states that women should wait at least 2 hours after drinking 1-2 standard alcoholic drinks before taking flibanserin at bedtime. Because flibanserin is a CNS agent and is metabolized by the CYP3A4 pathway, drug interactions and CNS side effects are possible.25 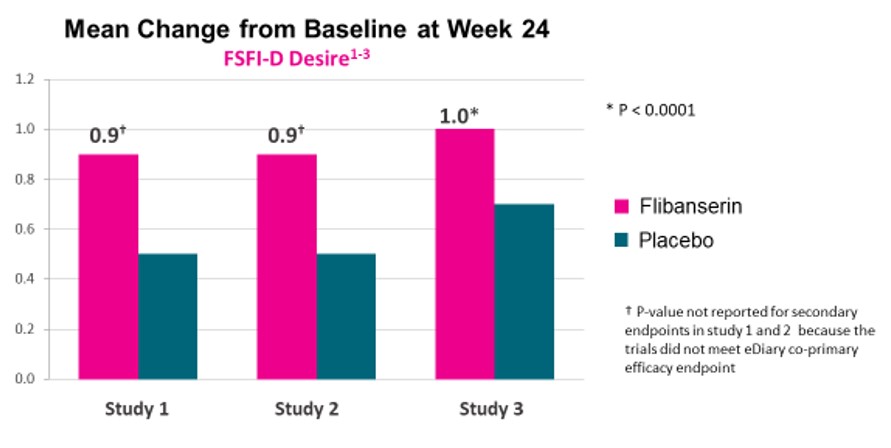 Figure 4: Flibanserin Showed a Decrease in Distress vs. Placebo Across All 3 Studies22-24

The most recent agent approved for HSDD is bremelanotide (BMT), a short-acting on-demand therapy that is administered via subcutaneous auto-injection 45 minutes prior to sexual activity.26 Bremelanotide is a novel cyclic 7-amino acid melanocortin-receptor agonist with high affinity for the type-4 melanocortin receptor, an analog of α-melanocyte-stimulating hormone (MSH).27 In contrast to flibanserin’s chronic dosing, BMT initiates a rapid release of dopamine post-injection leading to a quick onset; as such, patients generally recognize within the first few doses whether or not the agent will be effective for them.

The pivotal phase 3 RECONNECT trials demonstrated women taking BMT had significantly increased scores versus placebo (PBO) on the desire domain of the FSFI at 6 months, indicating an increase in sexual desire (Figure 5); a significant reduction was also seen in their Female Sexual Distress Scale-Desire/Arousal/Orgasm (FSDS-DAO) Item 13 score at 6 months, indicating a significant reduction in distress related to low sexual desire (Figure 6).28,29 In addition, a significantly greater percentage of patients taking BMT (58.2%) versus PBO (35.6%; P<0.0001) agreed that they benefited from taking the study drug. There are no restrictions on prescribing BMT, with the most common side effect being nausea (40%); 8% of subjects discontinued owing to nausea and vomiting.28,29 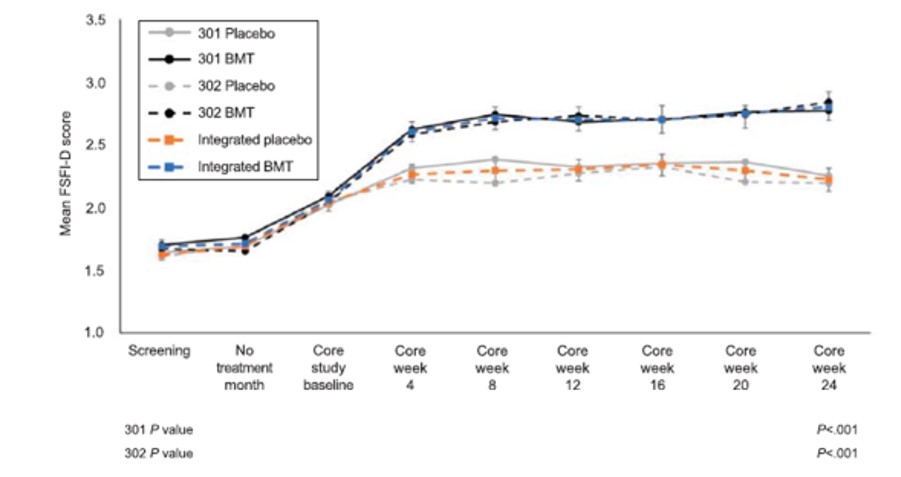 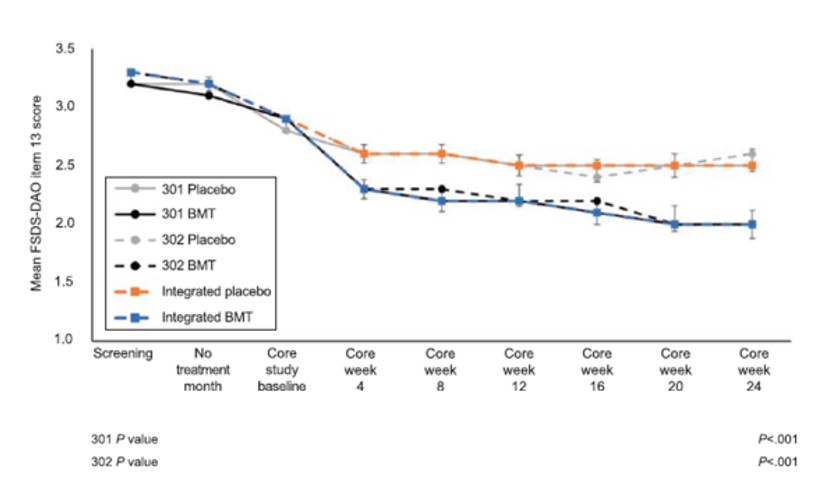 In addition to the two approved agents, other agents are used off label. Testosterone has good evidence supporting its use but has not been approved owing to potential safety considerations. A 2017 systematic review and meta-analysis included 7 randomized controlled studies of transdermal testosterone (with and without concomitant estrogen therapy), involving more than 3,000 postmenopausal women.30 The transdermal testosterone patch (not approved in the US for women) led to significant increases in sexual desire, sexual activity, sexually satisfying encounters, and orgasms, and a significant decrease in personal distress compared with placebo.30,31 Other treatments, estrogen, intravaginal DHEA, and ospemifene are used primarily in postmenopausal women for vulvovaginal atrophy and associated dyspareunia.32 Bupropion may be used as a rescue medication for SSRI-induced sexual dysfunction,32-35 and there is some evidence supporting the use of PDE-5 inhibitors in patients with arousal disorders.36-38 There is, as yet, no evidence regarding the combination of flibanserin and BMT, nor is there sufficient evidence regarding the use of BMT in postmenopausal women.

HSDD is common and affects about 10% of premenopausal women; as such, clinicians should routinely screen women in their practices for HSDD. While many clinicians are not qualified to provide sexual therapy, they can provide limited information and education, office-based counseling, and, when appropriate, pharmacotherapy and/or referrals. Two agents—fibanserin and bremelanotide—have been shown to be safe and effective in managing premenopausal women presenting with HSDD.

Overcoming Barriers to Talking with Your Patients About Hypoactive Sexual Desire Disorder (HSDD): Screening Tools and Advances in Its Treatment

Even though HSDD is the most common female sexual dysfunction, it’s persistently underdiagnosed and undermanaged.