The 2006-2010 National Survey of Family Growth reported that almost all women of reproductive age (99% or 53 million women aged 15 to 44 years) have used at least one form of contraception at some point in their lives.1 The most common contraception methods in this survey were the male condom (93%), the pill (82%), withdrawal (60%), and the Depo-Provera injection (23%). More recently (2015-2017), reproductive-age women reported using the pill (22%), sterilization (22%), condoms (15%), an intrauterine device (14%), implant (4%), contraceptive ring or patch (2%), an injectable (4%), and the withdrawal method (7%).1 With the increase in available forms of contraception, it is evident that no single form is preferred by women.2 Importantly, contraceptive choices are known to vary on a case-by-case basis during an individual woman’s reproductive years. Various factors including effectiveness, dose, hormonal versus non-hormonal methods, delivery route, level of invasiveness, and frequency of administration appear to play a role in the selection of a contraceptive method.3 Given that half of the pregnancies in the United States are unintended and are attributed to inconsistent use of contraception, providing more effective birth control options is a high priority and is pivotal to the empowerment of women.4

As shown in Figure 2, when the Ortho Evra patch was introduced in 2002, it accounted for 1 out of every 10 combined hormonal contraception prescriptions.7 However, after reports of serious venous thromboembolic events surfaced in 2005, coupled with an increased exposure to estrogen (60% higher than a 35 μg pill), use of the Ortho Evra patch fell dramatically. This coincided with an increased use of the NuvaRing, while Xulane®, a generic version of Ortho Evra, failed to garner substantial uptake (Figure 2).7 A pharmacokinetic comparison of Xulane/Ortho Evra (norelgestromin plus ethinyl estradiol) and Twirla (levonorgestrel plus ethinyl estradiol) with oral contraceptive pills demonstrated that the Twirla patch is similar to a lower-dose (30 μg) pill. In terms of side effects (headache, nausea, breast tenderness, and venous thromboembolism), Twirla is superior to both oral contraceptives and Ortho Evra/Xulane.8 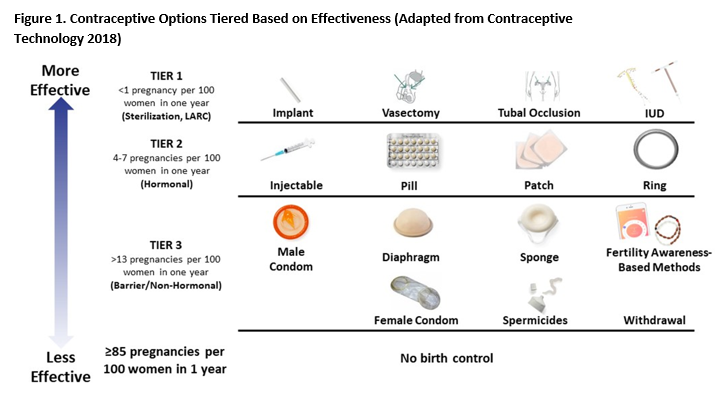 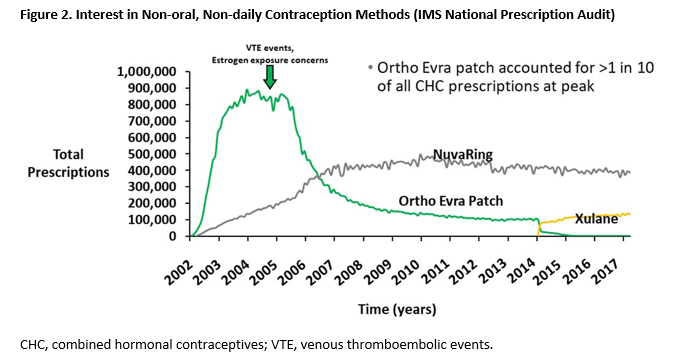 With the introduction of the Annovera (segesterone acetate/ethinyl estradiol) contraceptive vaginal ring and Phexxi®, a vaginal pH modulator gel, the number of contraceptive options available for women has increased, thereby transforming contraception decision-making into a much more dynamic process.5,9,10 Consequently, there is an urgent need to compare the safety, efficacy, and effectiveness of various options while ensuring the best fit for individual women based on their goals.

Contraceptive efficacy is defined as the rate of contraceptive failures or pregnancies during a specified period of exposure in a clinical trial. The Pearl Index (PI) has been widely used to determine the efficacy of various contraceptive methods and is defined as the number of pregnancies per 100 woman-years of product use.11 The lower the PI, the lower the probability of an unintentional pregnancy. Over the years, however, the PI value has risen in clinical trials, which has led to questions about its utility in comparing the efficacy versus actual-use effectiveness for various contraceptive options. This is evident in Figure 3 which demonstrates the increased PI of the contraceptive pills Loestrin Fe, Levlite, and Nordette in trials from 1973 to 2006.12 The clinical trial design, methodology, and study population characteristics are known to influence PI values.11 For example, older trials on oral contraceptive pills enrolled women in European Union trial sites, restricted enrollment based on body mass index (BMI) or weight, recruited more affluent and educated women, did not require anticipation of or recording of sexual activity, and did not account for a lack of sexual activity.11 On the other hand, contemporary trials for contraceptive options are now limiting clinical trial enrollment to women in the United States, have fewer to no restrictions on weight or body mass index (BMI), document or remove sexually inactive cycles, include more frequent pregnancy testing, and use more sensitive pregnancy tests.11 As a result, the PI value of newer contraception options is more inclusive of different representative populations and is therefore reflective of actual-use effectiveness. Figure 4 shows the summary of efficacy results from 2007 to 2019.13 As observed, the PI rates are lower for combined oral contraception available before 2007 (0.51-1.34) and higher for those available after 2007 (1.65-3.19). The PI for Phexxi, the on-demand vaginal gel, was reported as 27.5 (Figure 4), which is significantly higher than the other Tier 2 approaches.14 In such instances, the Kaplan-Meier (KM) value, which allows for cumulative failure rates for any duration of exposure and can incorporate censoring, can be used instead of the PI. For example, the KM or cumulative pregnancy rate for Phexxi is 13.7%, which translates into 86.3% effectiveness over 7 cycles with a 0.4% pregnancy rate per act of vaginal intercourse.14 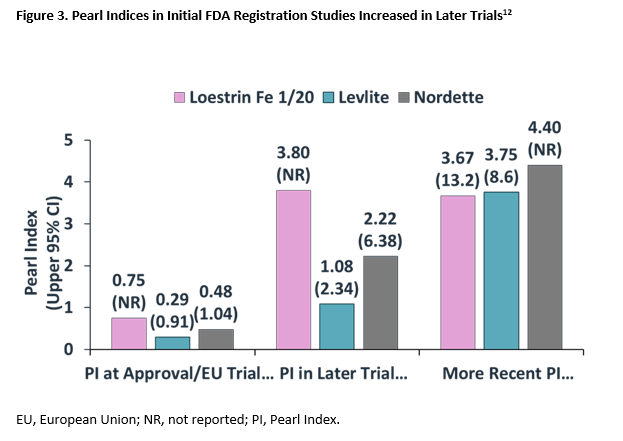 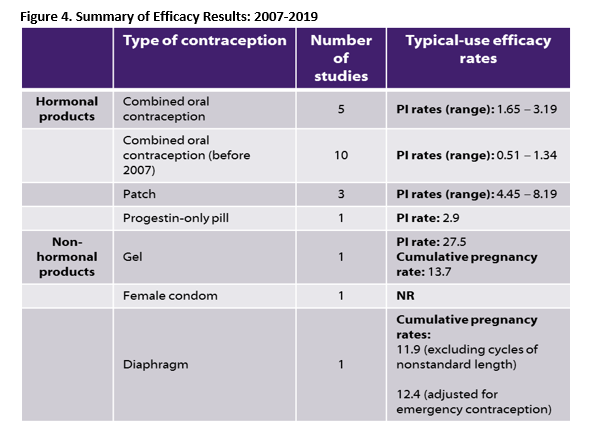 Notably, Annovera, a Tier 2 approach, had an overall PI of 2.98, but in subgroup analyses of youngest to oldest women, American versus European subjects, college educated versus grade school educated, parous versus nulliparous women, differences of usage, and Hispanic versus non-Hispanic women, the PI values ranged from a high of 8.50 to a low of 0.47.15 Statisticians are therefore known to prefer a life table analysis to determine efficacy and effectiveness of contraceptive methods. The benefit of this analysis is that it provides the cumulative probability of pregnancy or failure rate observed across 13 cycles of a study and within a particular population.16

Figure 5 shows the life analysis from the SECURE trial that evaluated the efficacy of the Twirla contraceptive patch. It is the first study to include a representative population of women relative to the United States, and it included sexually active patients, excluded sexually inactive cycles, and did not have enrollment restrictions on BMI or weight.16 As observed in Figure 5, it is clear that the cumulative probability of pregnancy for the overall population with the use of Twirla is 5.29% but drops to 3.97% in the non-obese population and is within the failure rate observed among women using Tier 2 methods.16 Indeed, a detailed analysis of the data based on BMI showed that the effectiveness of Twirla was lower among women considered obese (BMI >30; 93% effectiveness) as compared to women with overweight (95%) or normal BMI (97%).17 Increased venous thromboembolic events were also reported among obese women using Twirla.17 Consequently, Twirla is only indicated as a method of contraception for women with a BMI <30 kg/m2 for whom a combined hormonal contraceptive is appropriate and is contraindicated in women with a BMI ≥30 kg/m2.8Clinicians are also cautioned about the reduced effectiveness of Twirla in women with a BMI ≥25 to <30 kg/m2.8 Thus, the design of the SECURE trial and the data and measures that have been identified therein are expected to resolve some of the challenges associated with determining the efficacy of contraceptive methods in diverse subjects. 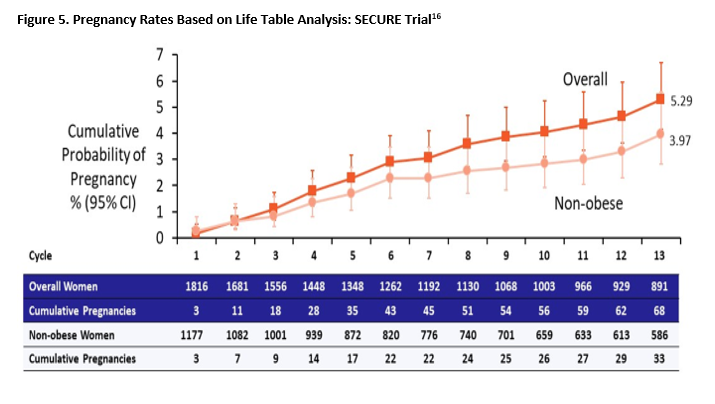 The most effective contraceptive method for a woman should have an acceptable benefit/risk profile, a preferable route of administration, and fit that woman’s lifestyle. Tier 1 contraceptive methods are the most effective; however, these options are not as popular as Tier 2 contraception due to invasiveness and irreversibility. While Tier 2 contraceptives provide flexibility and multiple choices, identifying the best approach for diverse women can be complicated for clinicians. Indeed, the best method for contraception depends on the patient’s choice—she needs to be well-informed about its efficacy and effectiveness in the real world. Different measures such as the Pearl Index, Kaplan-Meier method, and life table analysis can be used to compare the effectiveness of different approaches in distinct subpopulations and scenarios. The SECURE trial represents a thorough approach to determine the efficacy and effectiveness of contraceptive methods, especially for Tier 2 options. It is critical that new clinical studies are designed to provide well-defined measures of effectiveness and can provide accurate and generalizable information that can clearly outline risks and benefits for diverse patients. Clinicians can use these data and measures to counsel patients while ensuring the highest opportunity for successful contraception and help close the gap between efficacy and effectiveness in clinical practice, ultimately optimizing reproductive health goals.